Access Millions of Files from Thousands of Web Sites !

Song Snooper is a freeware product that detects URLs containing audio and allows you to download them. This means you can strip audio from video at sites like Youtube, Yahoo, Video, Google Video, Metacafe and Vevo, to name a few. It also detects and enables you to download files from sites that contain voice, music, songs, or any other audio. The final saved file after downloading with Song Snooper is an mp3 audio file saved at 192 Kbps.

Unlike Real Player RP or the Firefox plugin,Song Snooper is a standalone application. Song Snooper works by snooping or sniffing network activity on a web page, thereby detecting the url of an audio or video files playing on the opened page.

In abroad sense, Song Snooper allows you to downloadany audio from most websites (an estimated 90%). However, like RP and FF mentioned above, Song Snooper cannot download audio files that are streamed rather than embedded, hosted on an SSL page, encrypted, or are otherwise blocked from being downloaded by websites.Bottom line:Song Snooper does NOT allow you to download videos whose owners do NOT want these videos downloaded.By far, the vast majority of sites do not fall into these categories – that means that you have access to millions of audio files from the Internet. Here are just a few examples of some of the BIG sites from which you can grab audio.

Song Snooper is currently a Windows only product. It is entirely free. There are no restrictions or limitations on its use. There is a small pane at the bottom of the user interface (UI) in which advertisements will appear. For 99% of people this small annoyance is a small price to pay for this great little app.

Song Snooper is an audio detector and downloader. That is all it does, and for many people that is all they need. However, if you are looking for an application that does more, such as slowing the audio down, changing the pitch, looping the audio, or changing file formats, then you should consider Song Surgeon. 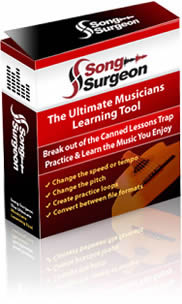 What is Song Surgeon?

Song Surgeon is used by musicians, translaters, transcribers, dancers, the sing learning to play instruments, singers,and others to manipulate the playback of audio. Song Surgeon allows you to change the pitch or tempo independently of each other. It also also you to create custom loop points for continuous playing. It allows you to convert amongst the most common file formats (mp4, mp4, aac, wmv, wav) and itsaves changes you make to files permanently. This means that once you save changes in Song Surgeon, you can take the newly created file and burn it to a CD or transfer it to your iPod or MP3 player and it will play by default at the changed pitch or speed you designated.

How To Get A Demo Version of Song Surgeon

If you are interested in Song Surgeon, please complete the form on demo page, and we'll send you a link to download the FREE Demo version. The Demo version is a fully working version with the exception that it will not allow you to SAVE changes to audio files. You can still make changes and listen to them in Song Surgeon, but they cannot be permanetly saved in the Demo version.

Song Snooper (or Video Snooper) is no longer functional and will soon be replaced by a new product named, Download Surgeon. To learn more click the link below.