Removing or Isolating One Instrument in a Mix

Some would argue that the great American past-time (or at least, one of them) is karaoke. It's a Japanese word meaning "empty orchestra," and it caught on in America in the 1980s when people decided it would be a good idea to drunkenly perform Celine Dion songs in bars to people they'd never seen before.

Obviously, people have other reasons for wanting to remove vocals from a song. One very good reason is for practicing a piece for professional performance -- it can be helpful to take out the vocals, particularly if you yourself are a singer, and sing along to the original track. Likewise, if you are a guitarist, bassist, etc. and need to strip a certain part of the audio to enhance your own performance, this can also be beneficial.

There are a variety of programs that claim to be able to strip vocals from audio. Among these are Audacity, AnalogX Vocal Remover, Wavosaur, Power Karaoke, and Karaoke Anything. However, you will find with your end result that a) the quality is typically not good and b) the level of the vocal has merely been reduced, not eliminated, and you have now spent money exclusively on a program that doesn't work all that well. Bummer. 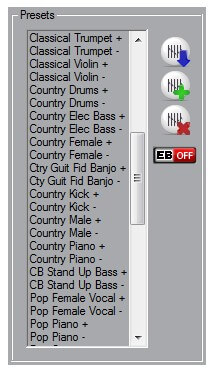 One reason why attempting to manually remove vocals from an audio track doesn't work is because the main vocals in the song tend to overlap with other key instrumentation, such as bass, lead guitar, piano, etc.

In removing the vocals, you'll be removing the same overlapping frequencies in all of the other instruments (see the chart below for a listing of instruments and frequencies). In addition, if there is any chorus or reverberation on the vocal (which there usually is), once the vocals are taken out, all you have left is a strange echo of what was once the leading vocal sound. These "layered" vocals make creating karaoke tracks extremely difficult to do. If one still attempts to strip parts of a song, however, the phase cancellation won't work well and will, at most, reduce the level of vocal but not entirely eliminate it by any means.

Technically, you simply can't remove a sound (particularly audio) from a recording once it has been mixed, even if manipulating these sounds is possible. Think of a cake -- would you be able to remove the eggs, flour, or other ingredients once it has been baked? No. However, there would be ways to disguise the ingredients.

Song Surgeon PRO has a couple of tools to assist you. We can't eliminate the vocals (or other instrumentation) for you, per se, but we do offer a 31 Band EQ with over fifty presets to provide a strong starting point for your mission to enhance or diminish sounds. Secondly, Song Surgeon does have what we call a Vocal Reduction features. Whether or not these feature works, depends upon how a song was mixed and mastered in the studio. On some songs it works quite well, but on others only a little and still on others, not at all.

Say, for instance, you wanted to manipulate the bass slightly. Since the bass is an instrument that always falls on the lower end of a frequency spectrum, you would probably be able to make subtle changes to the instrument's sounds without affecting the other instruments. In other words, the bass would fall too low on the frequency scale for other instruments to either overlap with the bass or be affected by the changes you make to it. See this chart for reference : 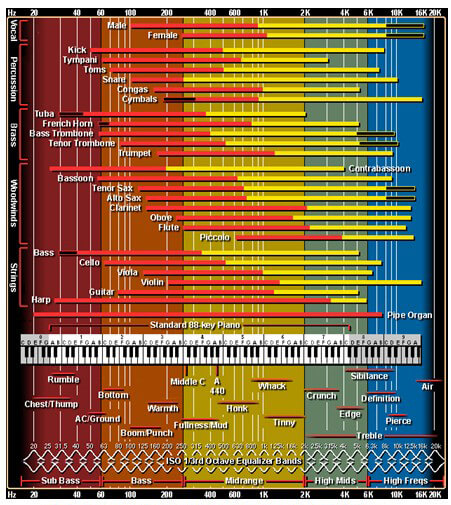 Click on this chart to open in a new
Window on the original page.

The bars in the image to the right represent different instruments/parts of a song. As you can see, the majority of these instruments overlap with each other. Some exceptions include the bassoon, the bass, the pipe organ, the tuba (all on the lower end of the spectrum), the piccolo, the symbols, and the violin (all on the high end).

Perhaps now you have some idea of how karaoke and vocal reduction works (and why stripping audio or other instruments rarely works well). This is why it would be extremely beneficial for you to explore Song Surgeon PRO's 31 Band EQ to aid in your musical ambitions -- it can't do the impossible, but it can make you satisfied with the end result!

Take our fully functional 4-hour demo for a test drive by clicking the download button at the upper, right-hand side of this page. It runs on both Mac (OSx) and Windows machines.