Audacity is a free, open source software for recording, mixing, and editing sound. Although it is not nearly as sophisticated (or expensive) as something like PRO Tools, Audacity is a decent editing and mixing piece of software. It is also reasonably easy to use. Contained within the list of features and functions in Audacity is the ability to change tempo and key. Although Audacity does perform these functions, the quality of the resulting audio is not particularly good. Tempo change (slowing down or speeding up) can be accomplished independently of pitch, but as you decrease the tempo you quickly begin to hear artifacts and distortion with decreasing tempo to the point that the result audio is unusable. 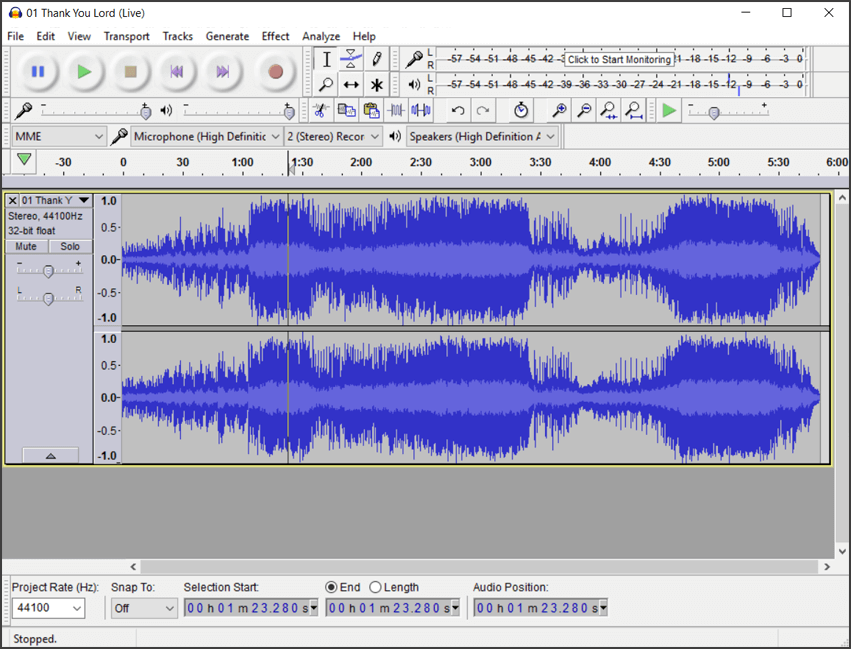 A much better way to change music, song or audio key is with Song Surgeon. There are two different ways to accomplish this with Song Surgeon. One is with our desktop software, which costs money but provides the highest quality audio after key and tempo change. We’ve heard from people that own Cubase, ProTools and other high end software programs and they have reported that the audio quality from Song Surgeon is equal to or better than that from these programs costing many hundreds, and in some cases thousands of dollars. The second method is to use our free online service. Let's briefly review both.

The Song Surgeon online pitch and tempo change is free and, importantly, the sound or audio quality of the pitch and tempo changes is good. It is NOT as good as what we have in our desktop version but it should be adequate for most situations. Obviously, the caveat here is that you must start with a high quality file to end up with a good quality file. If you start with a file of borderline quality, then the resulting file may have quality issues.

Song Surgeon is also available as a software application for both Windows and Macs. Version 5.0 of Song Surgeon is available in both a Standard and a PRO model. Version 5 three default algorithms. The first is for voice or a single instruments (V algorithm), one is for small changes of +/- 15% (P algorithm) such as those you might make when changing a file 1 or 2 half steps to for performance purposes. And the last (T algorithm) is for large changes such as those you might make to better hear something for learning or transcription purposes.

In addition to these standard default algorithms, Song Surgeon allows you to change the algorithm parameters to give you even higher quality than these three standard ones.

Lastly, Song Surgeon has formant preservation built into it. This is a function that eliminates the munchkin or chipmunk effect heard in vocals as key is changed. This is a must-have feature when you are transposing audio files that have vocals. While the slow down technology remains the most commonly used feature found in these types of programs, and musicians remain the most common users, the new version of Song Surgeon with its many new functionalities will certainly open the door to use in many other fields such as dance, exercise classes, transcription, karaoke, translation, and worship music, to name a few.

The current version of Song Surgeon has the ability to detect and display the key, tempo and chords of a song as it is opened within the program. Below is an overview comparison of some of the main features found in the two programs.

Surgeon customers. Similarly, the genre of music makes no difference. Song Surgeon works equally well across all types of music. Moreover, Song Surgeon is used for both practice and performance. Not only can you slow something down and loop it to help you learn better, but with Song Surgeon you can change the key or tempo slightly and then save these changes in a new audio file. We have many singers and performers who use Song Surgeon to make such changes and then use these files to sing to or as backing tracks.

The comparison table below highlights some of the main differences between Song Surgeon PRO and Audacity.