Riffmaster Pro has been on the market since 2006. Like most slow-down programs available, Riffmaster Pro (RMP) can speed up or slow down the tempo without changing the pitch.

Tempo or speed change settings range from 20% to 180%. Pitch change settings are done in increments of a semitone and range -80 to +80, although at almost a 7 octave change, the audio is unrecognizable. RMP also has a built in an equalizer and a loop editor. A screen capture appears below.

RFP utilizes the same audio pitch and tempo change engine as the Version 2 of Song Surgeon. Consequently with pitch and tempo change, RMP introduces some amount of distortions. With certain songs, it is noticeable almost immediately; with others, it is not. For example, we opened an organ piece and attempted to change pitch, and immediately we heard a wobbling and distortion. Similarly with tempo, a small change in the tempo of this organ music resulted in undesirable audio distortion. We also tried a rock song and found that we could slow the tempo on that particular song down to around 50% with minimal distortion. These same two audio files in Song Surgeon Version 3 exhibited no distortion. 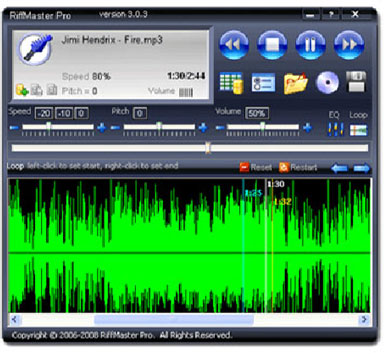 The new release of Song Surgeon, Version 3.0, contains dramatic changes and improvements from earlier versions. Song Surgeon Version 3 is available in both a Standard and a PRO model. The table below compares the differences between the Standard vs. Pro vs. Riffmaster Pro.

While the slow-down technology remains the most commonly used feature found in these types of programs, and musicians remain the most common users, the new version of Song Surgeon with its many new functionalities will certainly open the door to use it in many other fields such as dance, exercise classes, transcription, karaoke, translation, and worship music, to name a few. 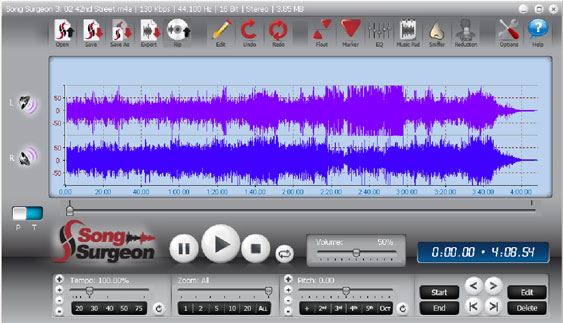 Song Surgeon provides a 4-hour, fully functional working demo. Four hours may seem like a lot of time, but we caution you to close the program when not using it to preserve this time. We also suggest that you watch the training videos found on the website before using the program, as these will help you get up to speed quickly with the operations of this very useful software. You can download the DEMO version from here.