Song Surgeon has a Vocal Reduction feature found within it. Many people have a misunderstanding of what this is or what it does. Let’s start by telling you what it is not. It is not a Karaoke creation tool. In other words you can open a song, apply vocal reduction, and expect to create a Karaoke version of the song where all of the instrumentals are still present, but only the vocal is removed.

Truth be told there is NO software that I know of that can do this. It’s a lot like making a cake. You start with individual ingredients: flour, sugar, eggs, milk, etc and you mix them all together and then you make a cake. Now after the cake is made, if I tried to remove only the eggs, I couldn’t do it. It is physically impossible. The same is true with a multi-track song that is mixed and reduced to a single stereo track.

So… what does Vocal reduction do? In a few rare cases because of how a song was mixed in the studio in can ALMOST completely remove vocals – but keep in mind that this is the exception rather than the rule. In the vast majority of cases it does reduce or dampen the vocals – but at the same time it reduces the overall volume of the entire song. Sometimes this reduction is so significant that it is difficult to hear what remains, even when volume is set at 100%.

Now many people that try the vocal reduction get discouraged because that is precisely what they hear – a track with all of the volume sucked out of it. As a result some users abandon it – thinking it is not worthwhile – and never try it again. Well that’s a mistake.

There are a couple of small tricks beyond simply applying vocal reduction to a song that allow you to create a VR track that is useful for learning purposes. In the above video, if you jump to 1:41 seconds in the above video and follow along as we demonstrate how this works on 3 well known songs.

As explained and demonstrated in the above video after applying Vocal Reduction, we then open the 31 band EQ. On the left side we grab the preamp slider and pump up the volume so the song can once again be heard.

The next thing that we do is go to the right side of the EQ and in the preset window select a preset for the instrument you are interested in enhancing to more easily be heard. While there are presets for many instruments there are not presets for all. Those marked with a plus (+) are to enhance that particular instrument. Those with a minus (-) should diminish this sound. You should consider the presets as a good starting place and depending upon the instrument and the mix, you may want to manually adjust individual sliders after applying the preset and listening. So here are the steps again. 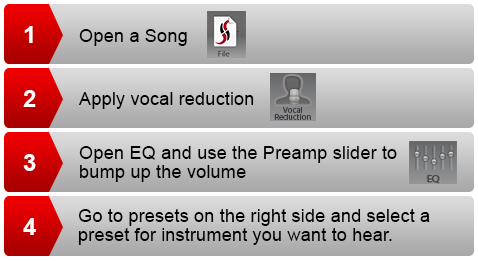 In this example we were isolating Guitar, but it could be piano, drums, banjo, etc. The process would be the same. We encourage you to try this. It’s not difficult to do. After a few times you should become proficient at the process – and you will be rewarded handsomely for this by being able to create songs or segments where you have diminished the vocals, enhanced your instrument of interest – and have a track that is much more useful as a learning tool than the original song you started with.